The Future is Idol

Kpop, Hallyu and scribbles from Sweden

Stockholm, Sunday 25th of May 2014, election day for the European parliament amongst other.

Steaming summer outside and steaming anticipation inside the concert venue (and an increasingly hot humidity due to broken A/C). We, a group of ten friends that met up at my place a couple of hours earlier to have some drinks, listen to music and watch MVs to get in the right mode (4MINUTE-mode), were finally there.

It was a rather surreal feeling riding the Stockholm Metro, to get off and walk down the sloping street towards the concert venue in a city so familiar, towards something not so familiar in Stockholm at all. To stand in line for K-pop in Seoul or Paris I have done. But this is Stockholm, not such a usual thing… 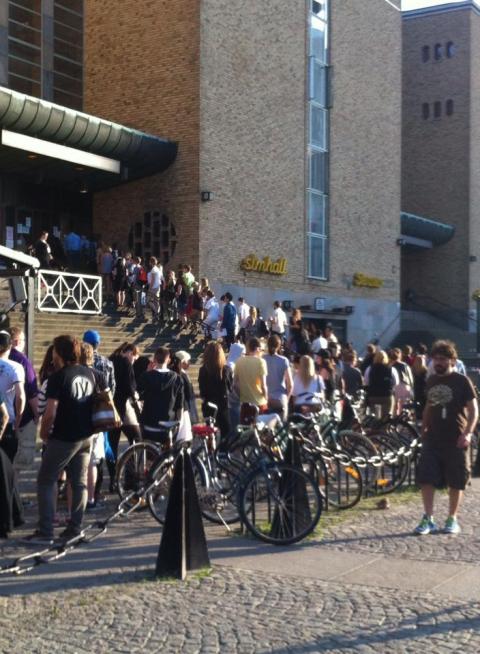 We were kind of late but so was the show as well. The line moved quickly and suddenly we were inside. I have been to this place many times before, for clubs and concerts. To be here now with the agenda to see one of my favourite K-pop acts felt kinda strange. As me and my friends made way through the packed, hot concert hall to find the best spot in front of the stage I could still not actually understand what we were about to experience. Not until the lights were turned off and the music, a remix version of Whats Your Name, blasted through us all I started realizing that 4MINUTE was actually about to perform in Stockholm that evening. This is the remix versions they performed:

I didn’t want to have any expectations at all for this event. Also, I have not been that in to K-pop at all lately. My interest have been fading as I have gotten other things to think about and the K-pop scene of lately has felt a little bit… blank. The outlook of getting really disappointed by this historical event hung over me as a dark cloud many weeks in advance.

There was absolutely no reason for worry though.

They gave it all.

After a similar showcase in Barelona a couple of nights earlier, the five members of 4MINUTE entered the stage looking super-relaxed and like they really enjoyed it.  It was an instant atmosphere of party that lasted through out the evening. There is of course a reason for this being one of my favourite groups. They are super cool and could pass for hard as stone. Cute is not what primarily sells them and sometimes they almost have an angry feel to their music. But with no language in common with the audience, the group made their best efforts communicating anyways and they felt really warm. Som lines and words in English, an interpreter on stage during the breaks and a few words in Swedish (Sohyun made the crowd go crazy as she shouted TJENA! (hi!) over and over again). It felt like these five women were quite moved with the responses they got from Stockholm. The constant sing alongs, roars and atmosphere that came from of a crowd consisting of women and men in different ages from not only Sweden but actually from all over Europe could not be mistaken for anything else but love. As the members asked if there were people from other countries than Sweden present they got Norway, Finland, Denmark, Poland and Germany and more as reply. It then felt like they might have been able to fill one or two shows more in Europe somewhere, not just Barcelona and Stockholm.

As earlier said, all five of the members put on an excellent show but actually Hyuna stood out a bit with her super-energy and focus, together with Sohyun who was extremly happy and shouted words in English and Swedish over and over again as she constantly interacted with the audience. Performing hits like Muzik, Mirror Mirror, Change, Huh and Hot Issue it sometimes felt like the floor would collapse due to the jumping crowd. Next to me during the concert stood a guy in my age (3o-ish) and looked absolutley mesmerized most of the time. Like it was the best day of his life. And I was there with him. Not strange at all those feelings and reactions, but quite logic. The group handed out water bottles, flirted, threw glow in the dark braclets far out in the audience and answered questions. The temperature was constantly rising (didn’t care at all about this though and I don’t think anyone else did either) at the venue and after repeatingly explaining how hot it was the members eventually started pouring water on each other and on the crowd. It felt like there were no boundaries for what would be allowed, and that is quite a refreshing feeling comming from a South Korean girl group, as you always expect everything around to be very restrained.

4MINUTE performed most of their hits and single releases. Here’s the set-list from the showcase (updated version AND please comment if more corrections should be done)

Wanna Get To Know Me

Is It Poppin’ (remix)

I Love It + DJ remix

As you see, there was no Volume Up nor any I My Me Mine in the set-list and that was of course a bit disappointing, but on the other hand I wanted them to go on for another hour… Although they sang a piece of it acapella during their chat with the audience.

I was anticipating the worst for this evening, just in case. But ended up happier then I thought possible. Clearly, this group is no joke. Talented, charismatic, sweet and extremely cool.

So was it all perfect? Well nothing is and there could have been better light on stage, the stage could have been bigger and sometimes the group and stage gave a messy feeling and the coreography did not present itslef perfectly during parts of the concert. But added up these are just small things in comparison.

And yes of course I bought a lightstick. Expensive but what the hell, fuckin 4MINUTE doesn’t come to Sweden every day. People might have stared at the sweaty me during the Metro-ride home and I wanted to tell them all about the brilliant evening I just had. No one asked though, so I sat there. Silent but happy. 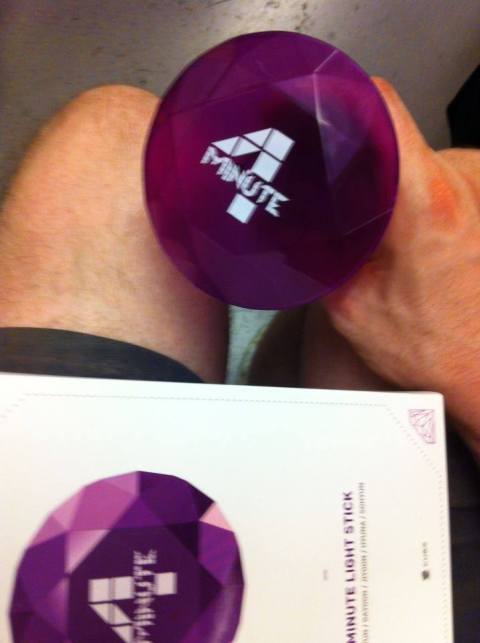 Such awesome, and as I have written before, epic on the scale like seeing Patti Smith or Morrissey for the first time.

The Future is Idol – L

Huge thanks to Julyssa at Kpop Nonstop for the arranged concert and sending me the set-list.

You are currently reading BOOM BOOM BOOM like it like it – a 4MINUTE fanbash in Stockholm at The Future is Idol.